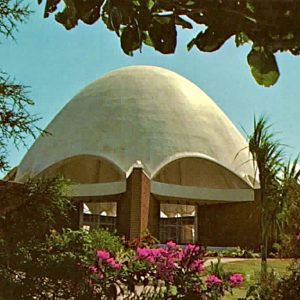 Our family of 5 with three children under 10 moved from Prescott, Arizona to tropical Panama in 1970 as foreign pioneers to help establish Baha’i communities in a country often called the crossroads of the world as the Atlantic and Pacific oceans are connected by the Panama Canal. My husband had just been hired by the Panama Canal Commission under the U.S. government as an instructor in the Apprentice program which provided training for the Panamanian apprentices to maintain the operations of the Panama Canal which at that time was owned and operated by the U.S. government. Baha’i pioneers are different than missionaries in that Baha’is get jobs in the area where they move to so as to support themselves and their families. We signed a two year contract and when the two years were up we signed another 2 year contract again and again etc. and since we were living a very exciting and interesting life there we finally ended up living there for 26 years. We lived there when the Panama Canal Treaty was signed and the Panama Canal was transferred to the Panamanian Government. Our children grew up there, learned the Spanish language, met and made friends with people from all over the world and graduated from the Balboa High School.

Our interesting life included being there for the dedication of the Baha’i Temple in 1972 where Baha’is from all over the world gathered for the dedication ceremony on the top of Cerro Sonsonate (singing hill) where there is a spectacular view of Panama City. During the two years the Temple was being built, each Sunday we drove 50 miles from the Atlantic side where we lived in Coco Solo to the Temple building site on the outskirts of Panama City on Cerro Sonsonate to meet on the construction site with other Panamanian Baha’is from all over to say prayers together for world peace and unity. During the Temple dedication ceremony it started to rain and those in the audience opened up their umbrellas inside the auditorium to protect them from the raindrops as the gated doors of the Temple are not enclosed so as to embrace the tropical breezes for cooling. A year after the Temple dedication the Panama Canal Company transferred my husband’s job to Balboa (Panama City) on the Pacific side of the Isthmus which was our home until 1996.

Among the many memorable times we lived in Panama I had the opportunity and privilege to travel to Haifa, Israel, as one of the national Baha’i elected representatives from Panama to vote for the nine members of the Universal House of Justice which is the world governing institution of all the national Baha’i communities around the world and is elected every five years. The election was held in the newly constructed Universal House of Justice building on Mt. Carmel in Haifa, Israel. That was the one and only time it was held there as five years later the Baha’i Faith had grown so much that a larger place had to be found to hold the election with all the additional national Baha’i representatives from many countries around the world. 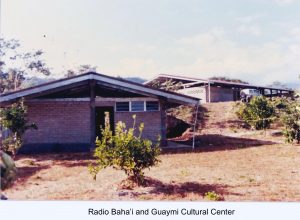 We lived among the Kuna people for a week on one of their islands. We slept in a hammock at night. The food was wonderful – we ate what they ate which was the fresh ocean catch of the day, fried plantains, and fresh coconut milk. We participated in a Kuna baby naming ceremony which included Baha’i prayers for infants along with their Kuna prayers.

We were there when land was obtained and radio Baha’i was installed as a service to the Guaymi people in the mountainous area close to Costa Rica. The National Spiritual Assembly of the Baha’is of Panama held a design contest for the best design for a Guaymi Cultural Center building to be built alongside the Radio Baha’i building in Soloy, a Guaymi village. My husband won the contest so his design was sent for final approval to the Universal House of Justice in Haifa, Israel. They stamped their final approval on it and said one of the main reasons why they chose it was because the design enabled the Guaymis to easily make their own bricks with a simple brick making machine using the clay from their own village and so men, women, and children all could have a hand in making the Guaymi Cultural Center themselves. The center is used to further the education and skills of the Guaymi people who come from all parts of their mountainous area to take classes. They are strong in Baha’i Administration as many isolated villages hold Baha’i Feasts every 19 days; elect their Baha’i local spiritual Assemblies each year; participate in electing a delegate to the National Baha’i Convention each year; and often there is a member of the Guaymi people elected annually to serve on the National Spiritual Assembly of the Baha’is of Panama. There are many tutorial schools in isolated Guaymi villages where a resident of the village volunteers to teach the children how to read and write. I helped in the training of some of the tutorial teachers who came to Soloy and actually taught them how to write their own stories so they could use them to teach the children in their class how to read.

We also made trips to hold children’s classes in the Darien jungle and during the day we traveled up the rivers in a dugout canoe and at night stayed with the Choco people in their platform homes perched high on stilts and ate plantains and whatever they hunted that day. The people we stayed with were so cheerful and hospitable to us and made us feel right at home. My daughter and I to this day remember an instance when she and I had returned home to our apartment in Balboa and upon entering it she swung her arms around and said, “We don’t need all this”. She found out she could be happy without having many material things in life. Now that is what I feel is a “good education” 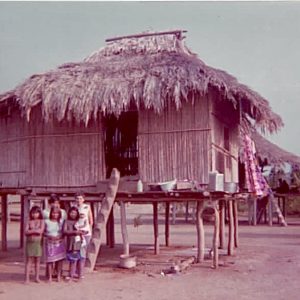 Marilyn Heaton and her family moved to Panama and lived there for 26 years as Baha’i pioneers.